From 7½ Lessons
Jump to navigation Jump to search

A note for Lesson no. 1, "You Have One Brain (Not Three)," in Seven and a Half Lessons About the Brain by Lisa Feldman Barrett.
Some context from page 14‌ is:

The outermost layer, part of the cerebral cortex, is said to be uniquely human and the source of rational thought; it’s known as the neocortex (“new cortex”).

The cerebral cortex is a sheet of neurons arranged in layers: 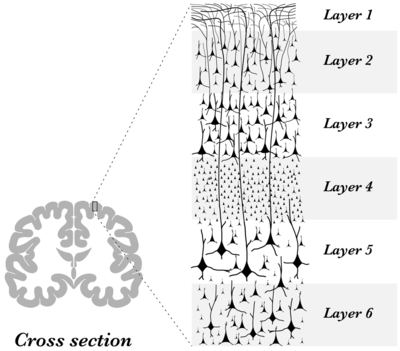 Cross section of six-layered cortex. From How Emotions are Made: The Secret Life of the Brain.

The sheet covers the cortex:

Three major parts of the brain. From How Emotions are Made: The Secret Life of the Brain.

Here you can see the cingulate cortex and the so-called neocortex: 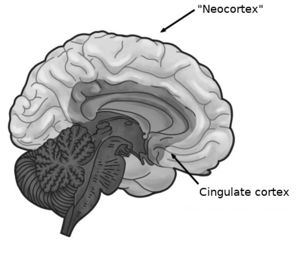 Cingulate cortex and the so-called neocortex
Retrieved from "https://sevenandahalflessons.com/w/index.php?title=Cerebral_cortex&oldid=4242"
Categories: