A note for Lesson no. 5, "Your Brain Secretly Works With Other Brains," in Seven and a Half Lessons About the Brain by Lisa Feldman Barrett.
Some context from page 89‌ is:

Why do the words you encounter have such wide-ranging effects inside you? Because many brain regions that process language also control the insides of your body,...

The brain regions that scientists call the “language network” overlap to a large extent with a network called the “default mode network,” particularly on the left side of the brain.

Two spots in the left hemisphere of the cerebral cortex are known to be important for language, although they are not dedicated to language per se:

It is possible to estimate the intrinsic brain network that is important for language by identifying which brain regions show changes in activity that fluctuate in sync with Wernicke's Area and Broca's Area. These regions are depicted from yellow to red in the image below. (Compare to Figure 16 in Dronkers 2011.[1]) This network of regions overlaps considerably with one of the two brain networks that is most responsible for regulation the internal systems of your body, called the default mode network, which is overlaid in blue.[2] 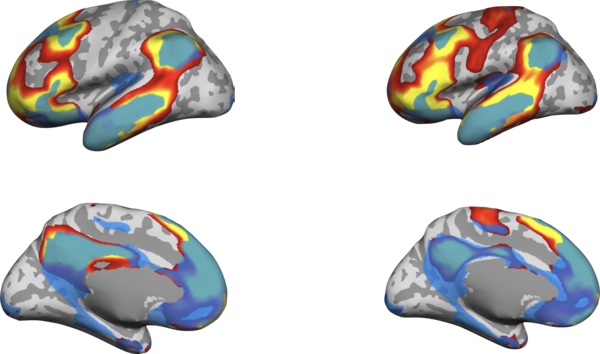 There is some debate about whether the assembly of neurons most responsible for processing the words you hear and speak is separable from these two other networks when using task-related brain activity, such as listening to sentences or remembering objects on a computer screen, rather than brain connectivity, as I have done here (e.g., see [3]). When reading such papers, it's important to realize that: